You are here: Home / Eco-Friendly Fencing / Saving An Endangered Species With A Small Fence 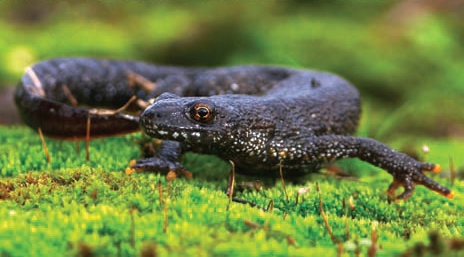 Newt Fencing: A Newt – The species is considered endangered.

The great crested newt is an endangered species across the European continent. Although the population of the species in the UK is substantially healthier in numbers than it is on mainland Europe, it is still under protection in the UK. Because of this important fact, any building development in the UK has to include an environmental impact report.

This report must take into account the impact of the development upon the local environment and any loss of habitat to the newts. If it is ascertained that habitat will be lost or that newts will be killed or disturbed a licence must be applied for from the Environment Agency. The onus is on the contractor to outline what counter measures will be undertaken in order to alleviate any potential damage and disturbance to the newts.

Drift fencing or newt fencing as it is known, is used when the control of newts or other amphibians is required. It is made from lightweight yet strong plastic panels. It is supported by plastic or wooden posts. In recent years there has been a drive to create fencing that is reusable, vandal and fire proof. Formerly the fencing would end up in the waste of the building site which was not an environmentally sound practice. There are two options available when creating a fenced area. Either the newts are kept out of the building site or they are enclosed by the fencing to be captured and trans-located to a new area.

The newt’s (Triturus cristatus) natural habitat consists of both dry land and a body of fresh, standing water which is used as a breeding location. Woodland, grassed areas and hedges all make for ideal locations for the great crested newt. Brownfield sites are also favoured by the newts. This of course can bring them into contact with humans. While they pose no risk to humans they themselves can suffer from this interaction. Their habitat can be damaged or destroyed which is why their protection has been enshrined in law.

Under the Wildlife and Countryside Act of 1994 it is an offense to deliberately kill or hurt the great crested newt. It is also an offense to destroy their habitat whether by malice or ignorance such as in the process of developing a site. There have been further acts to protect different species with amendments in 2010. There are of course different species that are not covered by the acts and thus are not protected. The newts breed from February to April and after this time will be found on land. They never stray more than 600 metres from this breeding location.

After it has been ascertained that all newts from the site have been trapped and accounted for and that the terms of the licence have been adhered to, only then can building work commence.

Jonathan Fox is a writer for www.newtfencing.com on subjects such as newt fencing and snake fencing.